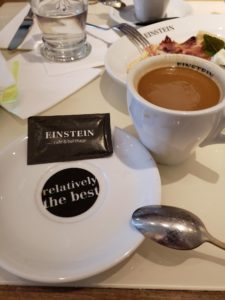 Last summer I gave a talk at the University of Oxford, sharing my work on the comparison of childhood and education between Russia and the US. My husband and I decided to prolong our European stay and spent a week in Switzerland. We were sitting inside a small cafe in Bern named “Einstein” on a warm day in late June. Suddenly we heard a female voice coming from the street, saying in a very loud Russian: “Renowned physicist Albert Einstein lived in this house for seven years while he stayed in Bern!” My husband and I burst out laughing, we didn’t expect to hear the Russian language in the heart of Switzerland. Not only that, the woman spoke in that very particular Russian voice, with the volume going up towards the end of the sentence, as if every statement ends with an exclamation mark, to convince the audience even further. The woman, clearly a guide to a group of tourists, continued: “Einstein worked at the Swiss Patent Office, was a lecturer at the University of Bern, then a professor there, then a president, then a professor at the University of Zurich, then a rector of that university! He was also a professor in Berlin before moving to the United States to be a professor at Princeton!!” Clearly, the woman was extremely enthusiastic about Einstein’s accomplishments and academic positions. However, she may have slightly exaggerated; Einstein never served as rector or president of these universities. I said to my husband that I thought such enthusiastic tour guides could only be found in the Moscow V.I. Lenin Museum. When I retold this story to my parents, my dad wondered whether I had ever visited that museum— he didn’t remember taking me there in the twenty years I lived in the Soviet capital.

In fact, not only had I visited the Lenin museum, I also served as a tour guide there on several occasions. These were very special occasions: I participated in the “scarf tying   ceremony” welcoming the new cohort of Pioneers, the young Leninists. During Soviet times, children typically took the Pioneer Oath in the 4thgrade, the first year of middle school. Because I was an exemplary elementary school student, having straight A’s and exhibiting good behavior, the school nominated me with a few other children to become a Pioneer in the third grade. This was a very big deal, a great honor and a recognition of my accomplishments. The ceremony was to take place in the late fall in Lenin’s Funeral Train museum. I am not making this up: there was a museum in Moscow almost entirely dedicated to the train that took a lifeless body of the leader of the communist revolution from his dacha to the capital. Currently the place serves as the museum of the Moscow Railway. The day before the ceremony I did not feel well and developed a fever. Still, the honor was too great to pass over; I took my Pioneer Oath and had that red scarf tied around my neck only to spend the next six weeks at home with scarlet fever.

Four years later when I was in 7thgrade, I was asked by a secretary of the Pioneer organization of my school to be on the other side of the ceremony: to welcome the new Pioneers and to tie red scarves around the necks of 4thgraders. The times evidently became happier since the ceremony now took place in the V.I. Lenin museum, focusing on the life and accomplishments of the great revolutionary, rather than his death. Just a few days before the ceremony I was told that I will need to take the group of children and show them around the museum, essentially serving as a tour guide. When I voiced my concerns that I don’t have any specific knowledge of that museum, the response was along the lines “you are such a smart girl, you’ll figure something out”. This was 1987, decades before Wikipedia or Google. There was no easy way to find out what was in the museum and I had no time to make an actual visit before having to assume the role. The ceremony went well and then I was charged to lead a group of about 15 children around the museum. Since I did not know much more than my pupils, I essentially scanned the signs on the walls and recited what was written on them. Years later I watched the popular TV series The West Wingand found to my delight Rob Lowe’s character doing the same thing in the White House, only with a group of slightly older children. Both students in my group and in Sorkin’s series were bored out of their minds and quickly realized that their guides were not qualified for the job.

Strolling through the museum we walked into the room dedicated to the gifts Soviet people sent to V.I. Lenin. Whether they managed to do it while he was still alive or sent the gifts in his memory, it was quite an interesting room. There were different artifacts, from the Pacific shores of Vladivostok to the North Sea Murmansk, from Ural mountains to Uzbek steppes; items related to different ethnic cultures (clothes, hats, scarves), pieces of art, musical instruments, cups and medals dedicated to the Bolshevik leader. The budding educator in me realized that this room is the most relevant to the children and we spent quite some time looking at different items and discussing the gifts. When I had to come back (at least twice) to the subsequent ceremonies in the museum, I would take the children to the gifts’ room as quickly as possible, skipping the heavy ideological or historical content on the way. I guess then and there, at age 14 I learned that a. you’d better get well prepared to any “teaching” assignment and b. the content needs to be relevant to the audience.

Memory is a unique tour guide. In an instant you take a trip 35 years long, from Bern to Moscow, from Einstein to Lenin.