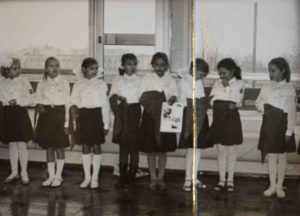 It happened at the end of the 1980s during perestroika or right after 1990, I cannot remember the exact time. My parents were eagerly absorbing liberal newspapers that were full of revelations about the cruelties of the Soviet regime and the hypocrisy of Soviet leaders. Once I picked one such a newspaper – Argumenty i Facti – and read a short article about Lenin. It accused Lenin of ordering the killing of his critics. I was astonished to read such news about the person who was the cornerstone of my schooling – his pictures were everywhere, our textbooks praised his deeds and dedication to the Soviet people. Items of our school uniform carried his portraits. On of the following days, our literature teacher, who also happened to be our class teacher, discussed Lenin. I do not remember the exact context of this talk, but I remember it being positive and uncritical, as always. I raised my hand and received a permission to speak. I said that I recently read an article that claimed Lenin was not as good as we thought. He killed people, I asserted. My strongest memory is of saying these exact words about a sacred person – Lenin killed people – and feeling triumphant. I knew things that adults knew and could voice them aloud. I knew, perhaps only unconsciously, that I am putting my teacher in trouble by making such an argument. I think I knew that it is no longer about voicing the utterly forbidden – it was worse – I said something that (still) belonged to the liminal. I enjoyed being both naughty and nosy, and seeing my teacher speechless and indecisive. Surely, by that time she was already acquainted with all sorts of newspapers that were freely available in regular newspaper kiosks. People on the streets were becoming more knowledgeable and critical of the Soviet regime. Yet, she could not make up her mind. I have no recollection of how the lesson ended and whether or not the teacher reprimanded me or started an argument. Perhaps none of these happened. What I remember for sure is that as in the cases of severe misbehavior, my parents were called to school for a discussion. When I told them at home what happened, they could not take the situation seriously. At the time, my maternal grandmother – herself a teacher of literature and former vice head teacher – was visiting us. My parents decided that in such a situation sending grandma to the school was good enough. The teacher and grandma discussed my grades and my occasionally disobedient behavior. No political issues were discussed in that meeting. The teacher ensured that by inviting my parents to school – she fulfilled what she probably perceived as her pedagogical duty and expectation of her superiors. My parents fulfilled theirs by sending a close relative to the school on a short notice. I have often remembered and retold this story as symbolizing the time of change and the prevailing confusion among the teachers. I also tend to think of it as an example of my parents’ complicit, but mocking attitude towards the school’s punishment measures.