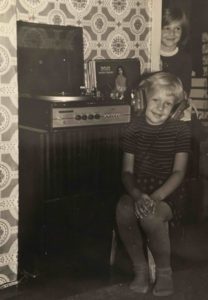 I grew up listening to beautiful fairy-tales of all kinds, including Latvian and Russian folk tales, Brothers Grimm, Pushkin, Lewis Carroll, and fairy stories my grandmother told me almost every night. My dad loved reading fairy tales aloud to me and he always chose books with the most beautiful illustrations. Later, when we bought a much coveted record-player, I also listened to the recordings of different fairy tales. These recordings, especially the 1976 release of Lewis Carroll’s Alice in Wonderland with songs by Vladimir Vysotksy, sounded very magical because of the incredibly captivating (and sometimes even hypnotizing) combinations of narration, sound, and music. When I listened to these fairy tales, I would close my eyes and picture the stories in my mind. As soon as the story-telling would begin, the boundaries between fairy tales and everyday life seemed to quickly dissolve. As soon as I put on the large and bulky Soviet headphones, I found myself in a different world. It seemed like there was no end to my imagination there. With my friends, we sometimes enacted fairy tales playing outside, building sand castles and roads for flower princesses, or erecting forts inside our apartments, and I spent a lot of time drawing different scenes and characters from my favorite folk and fairy tales.

The boundaries between fairy tales and socialist life, however, were often strictly redrawn by adults, as if reminding children of the socialist reality outside of our imaginations. In 1925, Soviet educator Yanovskaya published an influential article, “Does a Proletarian Child Need a Fairytale?”, arguing that fairytales and princesses prevented children from developing an understanding of historical materialism (quoted in Lewycka, 2013). Since then, children’s books and their physical surroundings – including playgrounds and preschool play areas – were purposefully geared towards creating “a real socialist world” for the child. In our preschool, girls had a special corner equipped as a kitchen and a hairdressing salon where we pretended to be ‘real’ hairdressers or cooks. We took turns being customers (getting pretend haircuts or ordering food), and serving our clients. 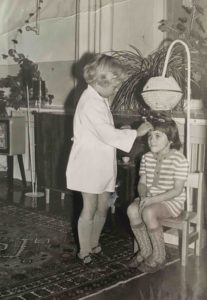 Sometimes the worlds of fairy tale and reality clashed. One such instance was when my kindergarten teacher began to become increasingly frustrated with me drawing fairy tale scenes and princesses when all other children were following the Soviet curriculum that emphasized the real world – transport, food, animals, or buildings – rather than fantasy. At one stage, I completely refused to draw pictures based on socialist realist aesthetics, which all children were required to draw – the picture of the house, the picture of the tractor working outside, or the picture of the vase on the table. All I wanted to draw was princesses. My teacher was getting increasingly annoyed, saying “Why can’t you be like all other kids?”, insisting that I draw what the other children were drawing.

After several unsuccessful attempts to persuade me, she eventually decided to talk to my parents about the problem. My parents asked me to cooperate and be more responsive in the classroom, and I thought I would try to do it. The next day, when we came to preschool, it was raining outside and our teacher asked us to draw the rain. This was easy – I immediately set to work and drew a picture of a princess from a fairy tale holding an umbrella with raindrops falling down. My teacher was not happy. When my parents came to pick me up at the end of the day, she showed this picture to my parents as proof of my disobedience. I waited for my parents’ reaction, not sure what to expect. To my relief, they quickly looked at each other and then they burst out laughing… in front of the teacher! I stood quietly watching them, and I smiled. A small victory.