A girl, Patricia, joined us in the kindergarten group in a regional town in Hungary. We have never had a child visiting before. Now we had someone from Chile. I remember being full of questions but don’t remember how and when I received answers.

It was in 1974 or 1975, just a couple of years after the start of the Pinochet regime in Chile. Many who were active in the Communist Party have left Chile. My mother tells me now that Patricia has arrived with her parents and then was left here to live with my favorite kindergarten teacher, aunty Jutka. She later heard that she followed her parents back to Chile and her parents were executed.

Patricia was in the kindergarten the next day. A darker skinned girl with curly hair and a smiley face. One day my mother brought the newspaper with excitement and showed me the article and the photo of Patricia and me in the kindergarten. The newspaper’s words still ring in my ears: “Patricia and her new friend Zsuzsa”. ‘Her new friend’ – it did sound magical. We also invited her once to Zalakaros bath close to our town. The photo was taken there. 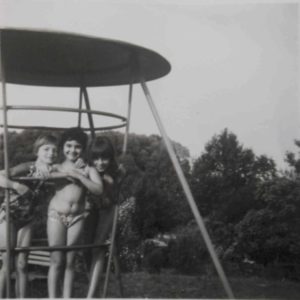 In the picture, which was taken at the bath, we are standing on the playground in a structure we called the spaceship. We wear swimsuits and smile as we look into the camera, enjoying the opportunity to have our picture taken. The photo is centered on Patricia, who stands straight, right in the middle, holding onto the rail. My sister on the right and myself on the left, we accommodate to Patricia’s position. My arm is around Patricia and my face rests on my sister’s arm wrapped around Patricia. As we envelop Patricia, the sun, landscape, trees, a flowering bush envelope us.

Photo. Zsuzsa, Patricia, and Eva at the bath

I lost sense of how long Patricia stayed with us in kindy but one day she was not there. There was no explanation given that I would remember. I missed her presence. I have been thinking a lot about her since, especially when I look at the old photo, worrying about where she is, if she is OK.

I keep searching for her. A couple of years ago I changed flights in Chile. I was thinking of her and googled her name and searched her on Facebook. I did not find her. I wish she is living a happy life with her loved ones.

Congratulations to the amazing @FEASproject for such a powerful exhibition! What a great write-up of the 'unfinished business' - I wish I was there in person to experience it! Maybe a #TravelExhibit?! Huge thanks for all your inspiring work, @BlaiseMindy @JoPollitt4 @Emilyem2 https://twitter.com/FEASproject/status/1551381338644938752

Our #FEAS Unfinished Business Exhibition is entering its final week @EdithCowanUni Spectrum project Space. It has been an amazing month, thanks to the curatory skills of @JoPollitt4 and the artists who generously contributed. Read a review in @seesawmag https://www.seesawmag.com.au/2022/07/taking-care-of-unfinished-business

Special issue of the journal Childhood:

Congratulations to MoCom: Motion Comics as Memory Work" for releasing another thought-provoking piece on the timely topic of border crossings based on collective memories. We were so lucky to have worked with you in @CrossDivides! https://www.youtube.com/watch?v=hdiGY0IrCIE

For an earlier comic based on @CrossDivides archive see https://www.youtube.com/watch?v=CvoAOMDLszk

Congratulations @arathings and the other authors. I will read back to back and then teach from the book. I enjoyed listening to the speakers a lot, especially Hayley and Fazal - noises of colonialism :)

Congratulations to my wonderful professor @arathings on the launch of her book Learning Whiteness about the role of education in upholding white supremacy. Excellent speakers and discussion at the launch today at @SOEBristol . Buy here https://www.plutobooks.com/9780745342153/learning-whiteness/